Spaghetti Squash (and a Low-carb dish) 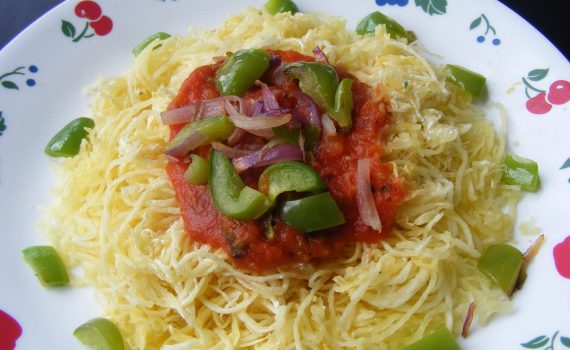 Spaghetti Squash (and a Low-carb dish)


So what’s so great about me putting up a photo of a plate of spaghetti??
Look more closely-that’s not your regular spaghetti-it’s a SQUASH!!!!! A couple of weeks back when I was chatting with my brother, he had mentioned that he had recently tried spaghetti squash and that got me intrigued and I quickly put it on my shopping list. I found it quite easily,but I wasn’t too sure if it was the right one as it looked no different from the rest of the squash where it was kept( I guess I was expecting something which at least vaguely resembled spaghetti),but the label on it very clearly said “Spaghetti Squash” and also had cooking instructions (thank you very much).

The instructions said that I could either bake it or microwave it-I microwaved it on high for about 7-8 minutes(after piercing the rind) and let it cool for sometime before cutting it open-and voila, there was the spaghetti just staring at me-beautiful!!! 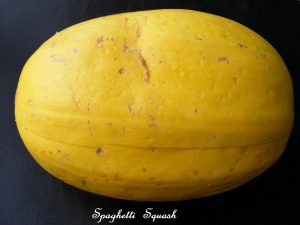 I hadn’t even thought of what to do with it. I could make spaghetti(after all it was named after it) or I could use it as noodles. Since this was the first time,I settled with a simple spaghetti dish with sauteed vegetables along with grated Parmesan cheese (you could try adding chicken, meatballs).  The result was a nice crunchy dish( and it was all vegetables!!) which was very filling.

Next time I’m going to be a little more adventurous and try out something new-maybe a salad, or maybe a stir-fry dish,or use it as noodles. Any suggestions??

Question: How would you like to try out Spaghetti squash?